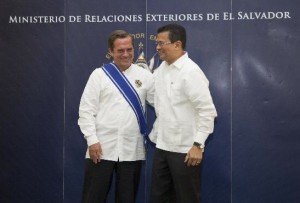 The Chancellors of El Salvador and Ecuador, Hugo Martínez and Ricardo Patiño, respectively, agreed yesterday to strengthen relations, bilateral trade and cooperation in various fields, in the framework of an official one-day visit of Patiño to the Central American country.

Both Chancellors jointly with their delegations addressed the strengthening of bilateral relations in areas such as development cooperation, security, planning and implementation of the “good living”, which Patiño defined as life in “a more just society.”

It was also agreed to hold the Second Meeting of the Mechanism of Political Consultation and Bilateral Coordination and the II Meeting of the Joint Committee on Technical Cooperation, at the level of Vice-Chancellors in October in Quito, according to the Chancellery.

The possibility that the Ecuadorian President Rafael Correa visits El Salvador next year was also discussed, although it depends on his agenda and that of his Salvadoran counterpart Salvador Sanchez Ceren.

Daughter of the late Hugo Chavez is designated as UN Ambassador