Chernobyl Victims were Remembered with Candles and Flowers 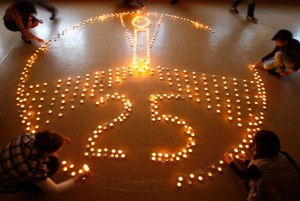 The commemorations for the victims of Chernobyl in the 25th anniversary of the nuclear catastrophe began at dawn in Ukraine, where the accident occurred. The patriarch of the Russian Orthodox Church, Kirill, at 01:23 (local time), rang the Chernobyl bell, which traditionally sounds the day of the anniversary of the accident. Hundreds of survivors placed flowers and candles in Ukraine.

Greenpeace projected images about the explosion of reactor 4 on April 26, 1986. In addition to a skull, it was possible to observe texts against nuclar energy in Japan, Germany, and Russia.”We are bound to leave nuclear power because of the Chernobyl victims,” said German Tobias Münchmeyer, Greenpeace member in the Ukrainian town.

According to various estimates, between 10 000 and 100 000 people died as a result of the Chernobyl disaster. However, despite the disaster that was hidden for days, countries continue to opt for nuclear energy. The catastrophe takes on new relevance these days because of the nuclear accident in Fukushima, Japan, which occurred following the earthquake and tsunami of March 11.