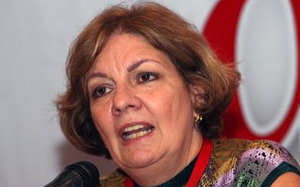 Several ecological and political activists of the Venezuelan group Cuspides del Alba rose yesterday, between Caracas and the Caribbean Sea, to wave the flag of Ecuador while singing loudly in favour of the Amazon and protesting against the U.S. oil company Chevron – Texaco.

“Defending the Amazon happens by defending ourselves, if we truly believe in the integration we must respond as a bloc to protest and reject this aggression from Chevron -Texaco,” said Ana Elisa Osorio, the deputy of the Solidarity Committee Venezuela – Ecuador.

In 2011, Chevron was ordered by an Ecuadorian court to pay more than $ 19,000 million compensation for causing environmental damages in the Amazon between 1962 and 1990.

The next November 24 will be a day cycling in Caracas that will be in solidarity with Ecuador.