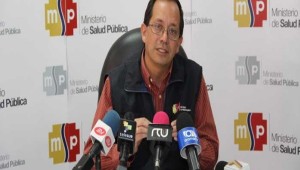 The Ministry of Public Health confirmed on Monday, December 15 the seventh case of Chikunguña virus in Ecuador and the one ofhigher risk, for having been detected in an area of high transmissibility.

This is the first case diagnosed in Guayaquil, which along with the one of Manta is one of the two most worrying of all registered in the country because (although imported), it was detected in the Ecuadorian Coast, where the transmitting agent of the disease is present: the mosquito Aedes aegypti, which is also the inoculant of the dengue virus.

Diego Acurio, Deputy Minister of Health, confirmed that Guayas thus becomes the fifth province (after Loja, Pichincha, Tungurahua and Manabi) to have detected the disease, although there is still no confirmed infection within the borders.

The Ministry of Health implemented an epidemiological fence which included a set of actions ranging from health surveillance of the sick person and his family, until the completion of a health community clean-up to control the proliferation of mosquitoes.