Chile suffers earthquake of 8.2 in the Richter scale 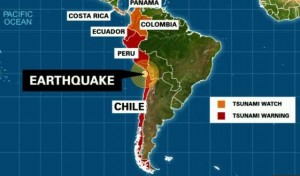 An earthquake of 8.2 magnitude on the Richter scale and long lasting has occurred in northern Chile, at 20.46 local time.

The epicenter of the earthquake was generated in the sea, 89 kilometers in the southwest from the town of Cuya, in the Tarapacá Region of northern Chile.

The authorities of the National Emergency Office (ONEMI) activated the tsunami alert and ordered the evacuation of 900,00 people in a preventive way all the Chilean coastal edge, which is about 4,329 kilometers.

At the time, Chilean authorities have already removed the warning for most of the coastal territory. The Tsunami Warning Center of the Pacific has retired the alarm for all the Chilean coast.

They also reported that there have been at least six death because of the earthquake due to heart attacks and crushing.