China: New Weapons are Not a Threat 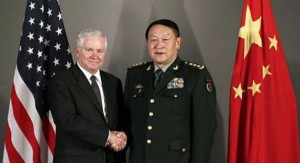 A Chinese military official, Liang Guanglie, said that his country military growth does not poses as a threat to countries in the region. The statement was made after having talks with U.S. Defense Secretary Robert Gates.

Guanglie, the Chinese Defense Minister, informed that his country’s “research and development of weapons system are absolutely not intended for targeting any country, and will not pose a threat to any country in the world.”

Currently Liang has new opportunities for development with the USA military. This refers to the U.S. sale of 60 Black Hawk helicopters, 114 advanced Patriot air defense missiles, a pair of Osprey mine-hunting ships and dozens of advanced communications systems.

In development there is also the radar-evading jet fighter known as the J-20. However, Gates said that the new aircraft would be ready for 2020 or 2025. Experts believe that the aircraft will have the radar-evading capability of fifth-generation fighters manufactured by the United Sates, like the F-22 and F-35. While Gates questioned how advanced that capability would be, the Defense Secretary expressed his concern regarding the Chinese progress on the anti-ship cruise and ballistic missile that could target U.S. vessels in the region, Gates called for the cooperation between the countries.