Chinese company´s funding for construction of the Pacific Refinery 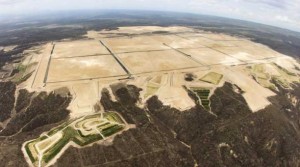 Hydrocarbons Minister Pedro Merizaldereported that since last year have they have entered into negotiations with the Chinese state company Sinomach to build the Pacific Refinery.

According to Merizalde, Sinomach want to enter into partnership with Hyundai, a South Korean company, and offers to realize the 100% financing of the plant that in its first stage demands USD 10 500 million, through Chinese and Korean banks. “It has been analyzed whether the offer is real or not. But we see that the proposal is serious,” he said.

According to its website in Spanish, Sinomach Heavy Industry Corporation is a subsidiary of China National Machinery Industry, which in 2011 was ranked by Fortune in the position 435 of the top 500 global corporations with higher incomes

In the country, the name of the company is Sinomach Ecuador and its website indicates it is dedicated to the sale of tractors and heavy machinery, with its headquarters in Guayaquil. The Refinery of the Pacific has an advance of 12.6% until July of 2014. The first stone was laid in July 2008.