“It’s an affirmation of what he has fought for,” said Liu Xia after finding out her husband Liu Xiaobo had been awarded the 2010 Peace Nobel Prize.

Liu Xiaobo, a dissident who is serving an 11-year prison term after repeatedly calling for human rights and democratization.

Liu was sentenced in 2009 for inciting subversion of state power. He is the co-author of Charter 08, a call for political reform and human rights, and was an adviser to the student protesters at Tiananmen Square in 1989.

Liu’s wife, Liu Xia, told CNN she could not wait to visit him in prison in northern China and tell him the news. She said she was packing under the watch of police officers who have promised to take her to visit her husband the next day.

“I am totally shocked and feel so happy,” she said. “I’ve never dreamed about this. Friends have asked me to prepare for a speech, but I’ve only prepared one for Xiaobo not winning the prize.” 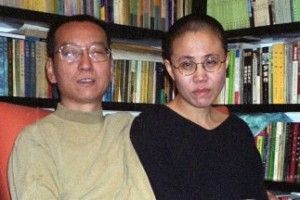 Liu Xia said she regretted her husband couldn’t share the moment with her. She said he will be “surprised and humbled” to find out, but also feel “a greater sense of responsibilities” because of the great honor.

“It’s an affirmation of what he has fought for,” she said.

Shang Baojun, his lawyer, said that Liu’s recent award could mean he will have to spend more time in prison. “I hope that he’d be released earlier because of the prize, but in reality, that will not happen,” Shang told CNN.

A Chinese foreign ministry spokesman said the awarding of the prize to Liu was “blasphemy against the peace prize” that could harm relations between China and Norway.

“Liu Xiaobo is a convicted criminal sentenced to jail by Chinese justice. His acts are in complete contradiction to the purpose of the Nobel Peace Prize,” spokesman Ma Zhaoxu said.

The human rights group Amnesty International called on the Chinese government to release all “prisoners of conscience” following the win.

“Liu Xiaobo is a worthy winner of the Nobel Peace Prize. We hope it will keep the spotlight on the struggle for fundamental freedoms and concrete protection of human rights that Liu Xiaobo and many other activists in China are dedicated to,” said Catherine Baber, the deputy Asia-Pacific director at Amnesty International.

It was unclear whether Liu Xiaobo had learned of his prize from prison, but he was the favorite of many around the world to win. The president of the Norwegian Nobel Committee, Thorbjoern Jagland, said Liu won for his “long and nonviolent struggle for fundamental human rights in China.”

In announcing the prize, he said, “The Norwegian Nobel Committee has long believed that there is a close connection between human rights and peace. Such rights are a prerequisite for the fraternity between nations of which (prize founder) Alfred Nobel wrote in his will.”

Liu’s struggle has made him the “foremost symbol” of the struggle for human rights in his country, Jagland said.

Despite the criticism from China, the committee stood by its choice and said it had expected China to react strongly. “We have a very strong tradition of awarding the prize to human rights activists of many different kinds,” Geir Lundestad, director of the Nobel Institute, told CNN.

“This is a tradition we are very proud of, and this is a tradition for which the Norwegian Nobel Committee has received much applause,” Lundestad said. “We felt that if we were serious about this tradition, we did have to come to terms with the question of China in this perspective, and this is what we then did this year.”

The winner of the Nobel Peace Prize receives 10 million Swedish kronor ($1.5 million), to be picked up at the award ceremony in December — though it was unclear whether Liu would be allowed to attend.

Liu spoke of his work in 2007, while he was between a series of house arrests.

“Since you chose to do this, you must have a preparation for being in prison,” he said. “Entering the prison you must face these things peacefully, not complain [about] others. I even don’t complain [about those] … who arrested me, because this is their inevitable action. I can also not let them arrest me if I chose other way.”