The young Ecuadorian singer Christine released her new song “Besame,” a song about being attracted to someone a lot. “Besame” also reached some digital platforms like Soundcloud and the social networks of the artist.

For the production of this song, which is authored by her, Christine counted on the collaboration of Rafael Cevallos, Daniel Betancourth, Xavier Jeldes, Jorge Andrade, Fabricio Quintero and the Borkis Music Entertainment studio (in Guayaquil) for the recording, in addition to the Sterling Sound studio of New York where her work was mastered.

Christine is from Guayaquil, and since she was small she showed interest in music, and thanks to the support of her parents she took singing and dancing classes. Currently she is studying music in Los Angeles, California. 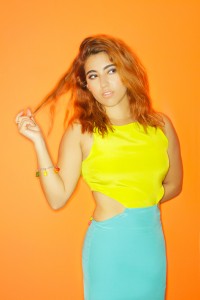 In her short career she has received several nominations for My National Bands (MBN) for the categories of “Best Artist in Projection,” “Best Promising Artist” with her songs “Single,” “Ya No Tengo Miedo,” and” Drunken in Love.”

The theme “Drunken in Love” was her second hit song that occupied important positions in several Top Charts nationwide, an important entry into the Top 20 Artists in Ecuador, and “Best Dance Song.”

In May 2015 she received the Red Record Award for “Best Revelation Artist,” and she is positioned among the favorites of the national Youth Pop. In addition, her songs are included in the programming of some independent radio stations in the United States.

Among her upcoming projects is the recording the “Besame” video clip and the release of her album. 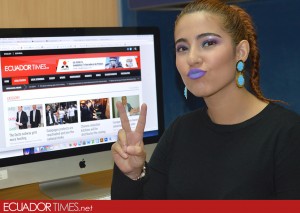