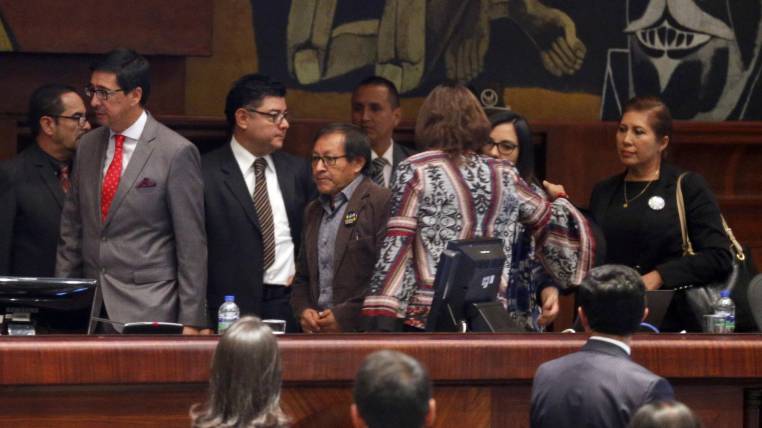 The National Assembly went from embarrassment to tragedy without solution of continuity. The first part of his morning session, dedicated to an inofficious debate, grazed the zero degree of ideas and the highest levels of cynicism. In the second, the Plenary received a blunt and unexpected bucket of ice water: the relatives of the El Comercio newspaper workers murdered by terrorists on the northern border were received in a general commission and the feeling of shame was increased by a simple contrast effect. After the shouting and the chacota, the assembly members swallowed and listened, in reverent silence, to the testimonies of national violence and defenselessness. It was a lesson for those who wanted to understand it.

The first point of discussion on the agenda was to guess what was to come: “Resolution of solidarity with people with disabilities and their families, and especially with the President of the Republic, Lenin Moreno, for the expressions expressed by the former president of the Republic. ” The proposal came, of course, from the ruling party’s bench. And it led to chaos. Resolutions of this type do not serve, in practice, for absolutely nothing other than full-body portrayals of some assembly members.

Sonia Palacios presented the arguments of her caucus: “It is inadmissible,” she said, “that the president’s disability has been used to insult him.” The response of  correístas came on behalf of Mónica Alemán. She spoke with a half smile of self-sufficiency painted on her face and had no qualms about using the relatives of the victims of El Comercio to beat their rivals: she was scandalized that she made them wait until the end of the session to receive them. She then attributed to his party the idea of giving priority attention to people with disabilities, a historical error that nobody corrected. To top it off, he victimized his caucus: she talked about the aggressions they receive in the Assembly and the physical violence they suffer in the streets.

The tensions and mutual animosity accumulated so far in the legislature suddenly erupted as a pressure cooker. Correístas versus rest of the world, once again. Assembly members from both sides shouted, they were silent, they scrubbed the dirty rags on their faces, some ripped their clothes and even Marcela Aguiñaga was offended by the insults, as if she had never called “bitch” at the top of her voice to María José Carrión.

Correistas shouted expletives when the others spoke: it was the most basic bullying transferred from the school classrooms to the plenary room with Gabriela Rivadeneira ahead. María José Carrión ordered her to be silent. María Mercedes Cuesta reminded them of “The patuleco is going to fall”. Raúl Tello dusted off Correa’s insults to women (gordita horrorosa, doll pie, neurotic …). And meanwhile the laughter, the shrieks, the insults shouted under the breath, the fuss … That was when Maria Mercedes Cuesta met with Mónica Alemán in the corridors (both went for a coffee) and went down a tube . The smile of self-sufficiency of the correísta disappeared.

Finally, the resolution was approved with 92 votes in favor and the president, Elizabeth Cabezas, requested the presence of the relatives of the victims of El Comercio newspaper. The assembly members were not prepared for what was coming, especially after such a shameful exhibition.

Yadira Aguagallo and Ricardo Rivas (girlfriend and brother of photographer Paúl Rivas) imposed order and silence in the room with the forcefulness of their interventions. For an hour they spoke of their own defenselessness against the lies, the contradictions, the deceptions of which they were victims on the part of the authorities in charge of the handling of the crisis, especially the ministers Patricio Zambrano (Defense) and César Navas (Interior). They documented their manipulation. They showed their inefficiency. The assembly members stood up to applaud them. The contrast between the circus they had just starred in and the real country that Yadira and Ricardo put before them was intense and painful.

In the afternoon, in the continuation of the session, two CREO proposals were approved. One by Fernando Flores to urge the Government to declare Venezuela a country of humanitarian crisis. And another by Byron Suquilanda to condemn the criteria of the presidents of Venezuela and Bolivia on Ecuadorian justice. (I)