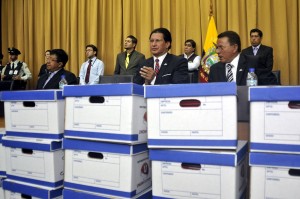 Eighteen new political movements joined the electoral board with the aim of participating in the elections of 2017, they were approved by the National Electoral Council (CNE for its Spanish acronym) from October 2013 until December of this year.

Out of the new groups are also 138 organizations: 10 national (4 parties and 6 movements), 45 provincial, 74 cantonal and 9 parish movements.

According to the CNE this figure could increase since there are 33 groups of national measures which are in the process of registration. Their representatives asked for the key and currently collect signatures for registration.

These comprise: the Democratic Center Movement of the Prefect of Guayas, Popular Unity (which would replace the Popular Democratic Movement) and Ecuador Force (for the missing PRE). The MPD and “roldosismo” lost their legal status and were eliminated in July by not complying with paragraph 3 of Article 327 of the Code of Democracy.

The number of groups may also decrease because the CNE is working on the revision of the provincial political movements that participated in the elections of 2013 and 2014 to determine if they comply with Article 327 of the electoral law.

The Electoral Adviser Magdala Villacis said the review is in charge of the departments of Political Organizations and Electoral Processes, which would have ready a technical report, but has not yet been socialized with the plenary for approval.