CNE gives $ 26 million to political parties in its accountability 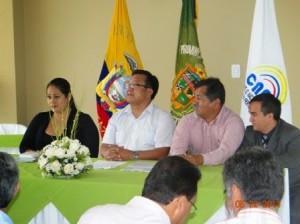 The National Electoral Council (CNE for its Spanish acronym) gave $ 2 6 million to organizations that participated in the general elections of February 17, 2013. The Electoral Function held on Saturday its 2013 accountability in Montecristi.

The members of the National Electoral Council (CNE) and the Election Judges of the  Electoral Dispute Tribunal (TCE for its Spanish acronym), reported the activities developed during the past year.

Authorities highlighted processes like the implementation of the constituencies, the training of the 84% of the citizen members of polling stations, the information through technology tools, the vote counting system, the expansion of the polling stations in the country and the inclusion of compatriots abroad in the electoral register system.

Additionally,  it was scored 807 social media, that generated 11,780 advertising, payment and patter orders for candidates to disseminate their proposals and work plans equally, noted the Minister Nubia Villacís.