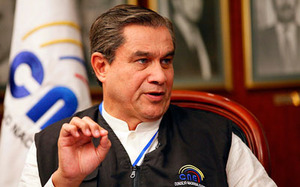 Within hours of the close of the enrollment period (at 18:00), the country’s political groups try to register their candidates for governors, mayors, councilors and members of parish. In Guayas, the delegation of the National Electoral Council (CNE) had extreme efforts to address the “avalanche” of delegations.

The auditorium, conditioned tents outside the Council and even outdoor seating inscriptions served to all amid protests, applause, riots, reports, rejection of folders, lack of staff and extended work schedules.

The regime leader, Rafael Correa, is a key figure in the election campaign of Alianza PAIS for promoting the sectional elections of 2014. This afternoon, he accompanied PAIS candidates and their alliances, to enrollment in Guayas, like it did with Quito and Pichincha.

Last Saturday Correa explained the importance of the upcoming elections in relation to the projects of his movement. In that line he urged his supporters to support their candidates.

The 35 days of the period for registration of all candidates was in vain, as most parties opted to enroll theirs yesterday and today. These actions put in trouble the CNE “is part of the national culture that always wait until the last minute to file everything,” lamented Domingo Paredes, president of the organization.

In the Board of Guayas, as happened to the general election last February, a group of political marketers were presented to enroll Don Burro, a donkey, of that allegedly represents the protest and denounces against candidates upright and on this occasion it was accompanied by the donkey Esperanza.