According to the president of the National Electoral Council (CNE for its Spanish acronym), Domingo Paredes, announced that the A4 form delivered to the collective group Yasunidos for them to gather signatures for a referendum that would prevent oil drilling in Yasuni National Park, will be the only valid format for the verification.

In an interview with the seized TV channel Gama TV, Paredes said that on October 14, 2013 the CNE gave a CD with the right form plus two printed forms.

“Look at the size,” this is the legal format in which the CNE will conduct verification of signatures, said the official while showing the A4 paper on cameras and dismissing the form that appeared over the weekend along with the El Comercio Newspaper in a smaller format, letter size. “For the verification of signatures we must scan the A4 size, they have not consulted us and have published whatever they wanted,” he added.

So far, the group of young people from Yasunidos, which opposes oil exploration in the area, have collected nearly 500,000 signatures. They need the support of 5% of the electoral roll, ie 583,323 signatures. They must deliver the signatures to the CNE on next April 12. 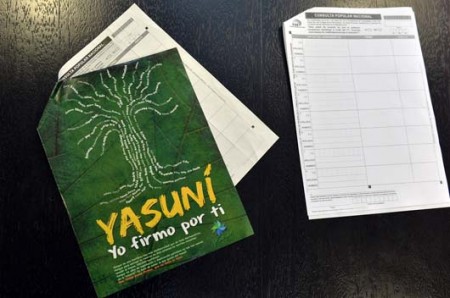 On the left: the format from the group Yasunidos. On the right: the correct format delivered by the CNE.