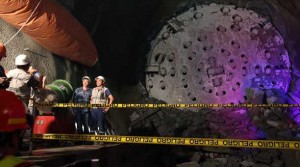 The Minister of Electricity, Esteban Albornoz, said that the hydroelectric plant Coca-Codo Sinclair will begin providing energy to the country progressively since February 2016. Initially, four of the eight turbines or units that compose it will enter, and then the plant will generate its maximum capacity.

Albornoz said that depending on the progress of the work more turbines than expected could even enter.

The project is spread over 22 hectares in the provinces of Napo and Sucumbios and have a capacity of 1500 megawatts (MW).

The construction of the plant began in July 2010 at a cost of USD 2 200 million, including its inspection, which is mostly financed by a Chinese loan. The construction company is Sinohydro, also Chinese.

Yesterday ended the first section of the water conveyance tunnel.

Gabela case “would have been the product of common criminals”