BREAKING NEWS
Valentine’s Day is a key date for small and medium businesses
Agreement with the USA will help fight drug trafficking
Cocoa exceeds the $ 2,900 per tonne barrier
Lenín Moreno: Businessmen from the United States see Ecuador as an attractive country for investments
Customs reduces rules and time for paperwork
Trump expresses Moreno interest in a trade agreement between the US and Ecuador
Ecuador’s international reserves total $ 3400 million, 4.7% less than January 31, 2020
Donald Trump recognizes Ecuador’s democratic example in the region
Lucio Gutierrez says he will compete in the 2021 presidential elections in Ecuador
Another Ecuadorian was accused in the United States by Petroecuador case 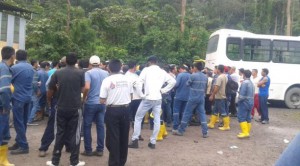 After the collapse on Saturday at Camp 4 of the Coca Codo Sinclair hydroelectric project, where 13 Ecuadorians and 3 Chinese citizens died, the workers decided yesterday to temporarily paralyze the work in the engine room.

One of them, Daniel Lescano, said that three days before the collapse, in which 13 died and 12 others were injured, several Chinese coworkers entered the reservoir, “and headed to the vertical well No. 1 to see the magnitude of the problem. You know what happened? nothing happened,” he questioned.

Delver Vera, Quality Control Engineer, indicated that the Labour Code and the Constitution are not respected and “are trampled as they want here,” he said.

Valentine's Day is a key date for small and medium businesses

Agreement with the USA will help fight drug trafficking