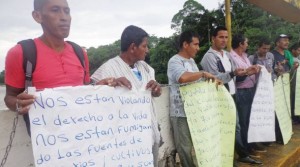 Yesterday, Colombian peasants moved to Ecuador and protested near the border bridge San Miguel, in opposition to the fumigations of coca crops, made by Colombia in Putumayo.

The inhabitants of the border areas with Colombia, announce possible massive displacements towards Ecuador, due to the resumption of fumigations to coca plantations by the government of Colombia. They do not rule out the possibility of seeking refuge in the province of Sucumbios.

“We are here because in our country there are no guarantees to mobilize, we are threatened and no one listens to us, we beg help to the president of Ecuador to call the attention to the Colombian president”, said Carlos Chapuel, spokesman of the affected.

While on the banks of the Putumayo River, indigenous and peasant communities living there, said they have seen flying over the area several planes in fumigation activities. These statements were confirmed by the political head of Port El Carmen (Putumayo), Ruben Bangera, who added that the aspersions on the border between both nations have affected Ecuadorian communities.

At another point, the peasant leaders of Nueva Montepa, complained before the political headquarters the presence of planes, so they ask for “the treaties with Colombia to be respected and our border to be not fumigated”, said Flavio Aguinda, secretary of the community.

Yesterday, the people who stay near the border bridge San Miguel, spoke with the governor of Sucumbios, Yofre Poma, who pledged “to deliver a report to be known by the chancellor and the president”. Poma, took the opportunity to ask the protesters to respect the law and not starring incidents or damaging public or private property in Ecuador.

Mayor of Iguala and his wife are arrested in Mexico

Obama reaffirms US immigration reform before the end of 2014