‘Objections’ of IESS member upon construction of three hospitals in Guayaquil, Quito and Machala 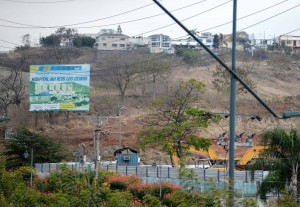 The recruitment process for the construction of three hospitals in Quito, Guayaquil and Machala by the Ecuadorian Institute of Social Security (IESS) at a cost of $ 580.5 million approved in July this year, generated views within the Management Council of that body.

The hospitals are being built at a time when that Council took measures to cover the deficit of the Health Fund (transferring part of the contribution of the Pension Fund).

According to the approval issued on July 11 by the Management Council (with votes in favor of the presidential delegate, Richard Espinosa, and the former workers’ representative, Paulina Guerrero), a hospital in Quito will be built for $ 256,08 million; other in Guayaquil, for $ 264.4 million and another in Machala, for $ 60 million.

But the procedure for the procurement of works was objected by the member of the employers Felipe Pezo.