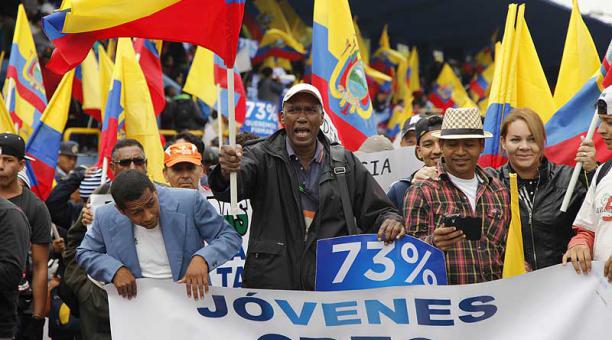 The group Compromiso Ecuador went for a second time with its supporters to the National Electoral Council (CNE). The objective of these demonstrations would be to put pressure for a referendum to halt the indefinite reelection of authorities. This time, they proposed a new question: “Do you agree that in Ecuador should be allowed the indefinite reelection of the President and other elected officials?.”

Unlike in the first question, in which by using the word ‘change’ the CNE considered it corresponded to the Constitutional Court (CC) to decide because it involved a reform. Compromiso Ecuador now claims that with this change, there is no argument to not deliver them the forms and thus they could begin collecting signatures.

Currently, the Constitutional Court is conducting a study of the constitutionality of the questions raised by the Patriotic Society Party (PSP) and the group Democracia Sí. The first group seeks to prevent the use of public resources in election campaigns and strengthen the alternation of power, while the second one proposes seven questions to preserve the current Constitution.

Cesar Montufar, President of Concertación and part of Compromiso Ecuador said that the goal is to “attack all possible fronts,” since there would be no deadline to press the CC to decide.

The march of Compromiso Ecuador was attended by about 500 supporters, who walked from De los Shiri Avenue, in northern Quito, to the CNE.