Vice President Glas is interned in hospital for severe dehydration 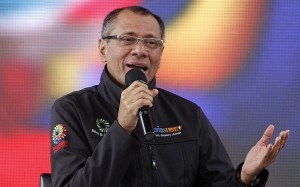 Vice President Jorge Glas Espinel remains hospitalized at the Metropolitan Hospital of Quito since last Saturday with symptoms of severe dehydration and stomach problems, according to the vice presidency.

His condition led him to intensive care and on Tuesday he was transferred to an observation room, according to medical sources at the health center.

Family members of patients who shared the intensive care area with Glas said that vice president was in the place with security personnel, his wife and his mother.

According to information from the Vice Presidency, the health of vice president is not under risk, but it is unknown the date he will be discharged.

Supercom presented study on compliance of the media law