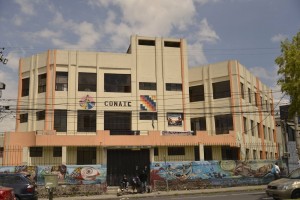 Before the “absence” of documents the State Comptroller contends it could not verify of the Confederation of Indigenous Nationalities (CONAIE) made a “fair use” of the headquarters building granted in commodatum in 1991 by the Ministry of Economic and Social Inclusion (MIES).

The agreement was no reason for the analysis of the inspection body, but to observe the implementation of the commodatum, the compliance with legal provisions, rights and obligations, the proper use of the public good, if it was used in the activities provided under the agreement and if the CONAIE accounted the custody of the property.

The Comptroller describes in its 29-page report, that an “incomplete file, without original documentation” was found. The MIES gave copies of the agreement with a subscription date that “is not readable,” and the CONAIE has said they do not have such information.

In an letter, the leader of the indigenous confederation, Jorge Herrera, indicates that preserving and filing the agreement and its annexes is not a conventional or legal obligation of them, but of the MIES.