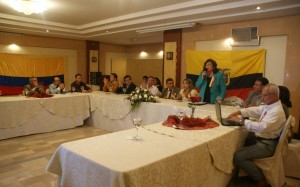 At the meeting they shared views about the different players of various political tendencies, different ideologies, social fronts and unions, representing various citizens groups “with similar concerns to the failure of the economic model of the current regime and its intention to reform the Constitution behind the backs of Ecuadorians,” said Gallo, the event coordinator.

Monge said that after this meeting they will surely continue “having some differences, but despite this the country and the current situation require this exercise for the future of all.”

Meanwhile, Freddy Bravo, from the group that seeks the registration of the political party Adelante Ecuatoriano Adelante (former Prian party), said that “the protests will be overflowing like rivers.”