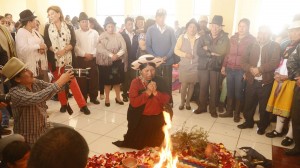 The Confederation of Indigenous Nationalities of Ecuador (CONAIE for its Spanish acronym) said it plans to exhaust all national legal instances to uphold the right of possession of its headquarters, the same that are claimed by the Ministry of Economic and Social Inclusion (MIES for its Spanish acronym), after the notification of finalization of the loan.

The President of the CONAIE, Jorge Herrera, said today at the National Convention of unions and social organizations that meets in Quito, they will make public the answer of the MIES and thus, they will decide actions to defend the headquarters.

Herrera also said that the CONAIE plans to continue occupying its headquarters and that the custody of the building will increase with delegations from the provinces to avoid eviction. He added that they will have the support of international indigenous activists.