BREAKING NEWS
Court orders to stop paying life pensions to Correa and Glas, and to imprison those sentenced in the Bribery case
Enough lighting fires in the Amazon rainforest, says Waorani leader Nemonte Nenquimo
In the United States, they accuse an oil subsidiary trader for alleged money laundering scheme
The Government of Ecuador denounces millionaire fraud in pensions of the Police
Nemonte Nenquimo, Waorani leader, is among the 100 most influential figures of 2020 for his environmental fight
Withdrawal of fleet of Chinese ships from the outskirts of Galapagos brings relief, but does not remove the danger for the species
Chancellor confirmed the process of expanding the continental shelf
Weakening of the dollar improves the country’s competitiveness in Europe and Asia
Core Petroleum paid Enrique Cadena $ 10.2 million, reported as suspects
Activity of the Sangay volcano is discrete and its incidence is minimal in the ash production

Conflict at the border affects businessmen in Esmeraldas 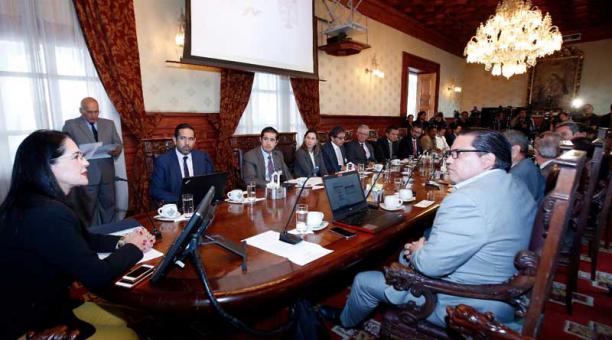 The security problems in the northern border, caused by dissident groups of the Colombian guerrillas, worry the productive and business sectors of Esmeraldas.

The businessmen of the sectors of palm, wood, cocoa, trade and construction of this province maintained this Monday, April 23, 2018, a meeting with the Minister of Industries, Eva García.

At the meeting, the official presented the proposal for the productive reactivation agenda of the area.

The Government’s proposal is to promote 14 productive chains, “in which priority will be worked on”.

Among them are aquaculture and fishing, forestry, avocado, sugar cane, African palm and coffee.

The Minister of Industries indicated that the creation of development poles has been considered, with the construction of an industrial park whose focus is export. These zones will have tax, tariff and other incentives that promote competitiveness.

The main concern of businessmen, for now, is security. The president of the Ecuadorian Business Committee (CEE), Richard Martinez, who participated in the meeting, considered it a good thing that the Government meets with the businessmen of the area to address the problem.

But he also pointed out that, before thinking about a reactivation plan that is medium and long term, it must be guaranteed that the activities that are there will flow normally and that existing investments in the area for more than 20 years will operate safely. These investments total more than USD 300 million.

Between 40 and 60% of commerce in Esmeraldas is affected by the current crisis in the province, according to the president of the National Federation of Chambers of Small Industry in Esmeraldas, Franklin Arroyo Mora.

Also the industrial sector indicates a damage that oscillates between 30 and 40%.

Government control actions, according to Arroyo, are necessary but have also hindered the development of activities, such as the assistance of employees or the access of suppliers to militarized zones.

In the commercial sector, restaurants are the businesses most affected by the border conflict, according to data from the Business Committee.

The planting of African palm employs about 6,000 people in the canton of San Lorenzo, said Flavio Paredes, representative of the palm sector of the province.

But this activity, along with fishing, has lower productivity at the provincial level, according to Arroyo Mora.

For Paredes, within the policy of economic reactivation, social aspects must be considered, such as the construction of a technical center for studies and a hospital.

The generation of employment that displaces illicit activities in the area is also fundamental, he said.

The Minister of Labor, Raúl Ledesma, indicated that this objective requires a comprehensive program of action and agreements with the private sector.

This Tuesday, April 24, a document will be presented to the President of the Republic, Lenin Moreno.

Bayardo Martinez, director of the Chamber of Commerce of Tulcán, expects the government to include this union in the dialogues, since he did not know about the meeting on Monday.

The executive said that for the last two weeks the flow of Ecuadorians to Tulcán has been reduced. Among the proposals of the union to reactivate the area are the approval of a Border Development Law and the creation of Special Development Zones, among others. (I)

An Ecuadorian figure among the most influential in the world