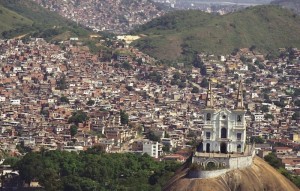 This week, 46 people have died since Rio de Janeiro police fought against gangsters who broke into police stations and burned 100 car and buses.

Rio de Janeiro policemen were prepared to take one of the biggest favelas of the city, shelter of many drug dealers, after violent days.

Gangsters are mad at the police because they’ve been trying to take control of 12 favelas.

Due to the violent times Brazil is living at the moment, sports authorities hesitate about organizing the World Cup 2014 and Olympic Games 2016 in the carnival country, despite Governments security measures—which include implementing soldiers to support police officers logistics to confront the gangsters.

On Thursday, drug dealers hid in Alemao (favela) after escaping. “We are going to invade Alemao in the right moment, we depend on the information Intelligence Service is going to give us,” said Roberto Sa, Rio de Janeiro public security sub secretary.

Due to yesterday’s clash, 3 people lost their lives and 10 were injured. The new elected president, Dilma Rousseff, will have to take actions on these matters as soon as she will assume presidency on January 1st.