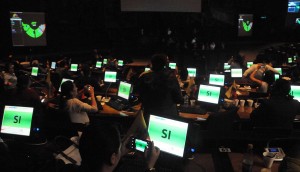 The political movements Alianza PAIS (AP), Regional Action for Equity (ARE) of Loja and Believing in Our People (MCNG) of Santa Elena, approved with 100 votes the proposed 15 amendments to the Constitution. The surprise was given by the government supporter Fernando Bustamante, who abstained from voting and left the plenary with haste.

Before the vote, the president of the Casual Commission on Amendments Juan Carlos Cassinelli (AP) proposed four changes to the sections contained in the report for the second debate.

Final modifications included: the right of public servants to organize to defend their rights “for the improvement in the provision of public services; changes in the retirement of public employees; the replace of a comma by point in the change that removes 8-year term for the formation of regions and the change of the Assembly disposal so that the Constitutional Court learns about the contents of this normative act.

The debate lasted nine hours and 40 minutes, a time in which the presence of the opposition was irregular and in the end only seven assembly of the PSC and Luis Tapia (former SP) stayed to vote against. The Pachakutik assemblymembers withdrew; and the CREO, Avanza and SP assemblymen were not present.