Constitutional complaint against the amendments is announced 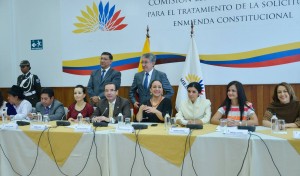 Juan Carlos Cassinelli (AP), chairman of the Commission for the treatment of Constitutional Amendments, yesterday handed officially to his peer, Gabriela Rivadeneira, the resolution comprising 15 amendments to the Constitution, which was approved late Monday with eight votes in favor by AP legislators and three votes against by CREO, PSC and Avanza assembly members.

According to Cassinelli, the report “is supplemented by all those criteria that allowed improve its contents,”debated for a year, so this was even notified to the Constitutional Court (CC).

Rivadeneira avoided telling reporters the date on which he will convene the plenary to approve them, because, he said, they have a term between December 2nd and January 3rd to vote on the text, which will be done in “package,” and not each amendment.

In this context, the opposition legislator, Luis Fernando Torres (PSC-Cambio) yesterday said he will submit a constitutional claim by the form of certain texts.

“I’m not going to sue the unconstitutionality of the transitional provision (which prevents indefinite candidacy for positions of popular election since 2017) because I can play that game, but moreover will submit a constitutional claim by the form of the amendments,” he said.