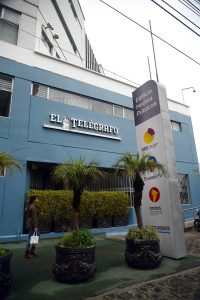 The birth of a new public company dedicated to the communication activity is in the planning stage within the government.

The two parties directly involved are still unaware of the details of the process, so they expect instructions.

This is El Telegrafo and RTV Ecuador, two public companies that will merge into a new body in accordance with the rule that governs them.

The merger was announced by President Rafael Correa, last May 24, in his report to the nation, as part of a ‘optimization’ of state resources.

Its director is the Coordinator Company of Public Enterprises (EMCO), which already “has begun a process of orderly planning of the merger,” confirmed to this newspaper the Secretary of Communication of the Presidency Patricio Barriga.

He indicated that EMCO “will hire a specialized consulting firm,” whose results will set the schedule, the new management model, among other details.

But he did not announced when the contract will be ready or the merger, or which funds the state would use.

From 2007 Naparina Corp. has been a consultant for Castor Petroleum