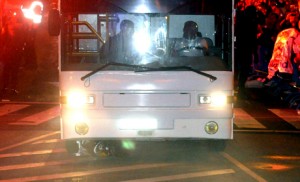 Real Madrid waited 18-years to earn the trophy Copa del Rey, only to be crushed by a bus in the midst of their celebration. Barely a few hours after Real Madrid celebrated their victory in the final of Copa del Rey in Valencia, defense player; Sergio Ramos dropped the trophy of 15 kilos from the bus that transported the team.

The front wheel of the bus squashed the trophy; workers of emergency services gathered the cup and its broken pieces. After the incident the cup was taken inside the bus and was not shown again during the celebrations in Plaza de Cibeles of Madrid.

Afterwards Ramos appeared on Telemadrid to inform that the cup was fine; the player that dropped the trophy made jokes about the incident of the cup in his Twitter account.

Japanese Exports Value Falls due to the Environmental Catastrophe