Julia Roberts and Javier Bardem, main cast of the movie “Eat, pray, love” are the most expected in this year’s festival, Julia will receive the Donostia Award. The festival will start on September 17 and will end on September 25 in the Basque city.

Pretty Woman’ s actress and Oscar winner Javier Bardem (No country for old men) will travel to San Sebastian to show Ryan Murphy’s Hollywood production about Liz Gilbert’s sabbatical year around the world to find interior peace, the film will be shown after the ceremony.

193 movies will be projected at the festival; only 15 of them will compete at the official category. John Sayles’ “Amigo,” a film about the American and Spanish Filipinas colonization at the end of the of the XIX century; Peter Mullan’s “Neds” 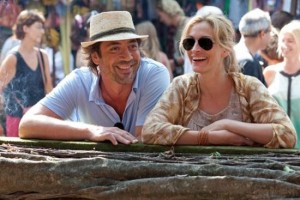 Two Latin American movies will fight for this year’s Concha de Oro Award: Felipe Cazals’ “Chicogrande” (Historical Mexican production), this is going to be the opening movie of the festival, and “Cerro Bayo” from Argentinian director Victoria Galardi. Goran Paskaljevic (Serbian Filmmaker) will lead the official jury, which will also be conformed by Claudia Llosa (Peruvian) and Pablo Trapero (Argentinian). Out of the contest, the documentary “Bicicleta, cullera, poma” from Spanish director Carles Bosch; is about the Catalan ex President Pasqual Maragall’s daily life after being diagnosed with Alzheimer.

Retrospectives will be dedicated to American classic director Don Siegel (1912-1991), who gave a new air for police theme movies in the 60’s and 70’s; he was also the author of “Dirty Harry,” “Escape from Alcatraz” among others. He also explored contemporary documentaries. In the retrospective “Non fictional’s new paths,” “Aral, el mar perdido” from Spanish director Isabel Coixet will be shown. Last year’s best movie Concha de Oro was given to Chinese director Lu Chuan for his movie “City of life and death.”