Cordicom launched campaign “Now my voice is heard” in Guayaquil 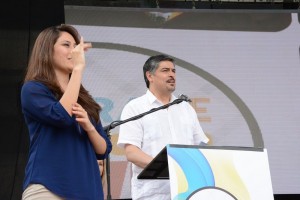 ‘Now my voice is heard’ is one of the actions undertaken by the coordinating body Cordicom and the Communication System of the country.

Yesterday morning, the Council for the Regulation and Development of Information and Communication (Cordicom), performed on the outside of the Faculty of Social Communication (FACSO), of the State University of Guayaquil, the nationwide launch of the campaign ‘Now my voice is heard’.

The event was attended by about 800 students of the institution and high school students.

‘Now my voice is heard’, is a project that began as a way to teach the general public about their rights under the Communications Law and eradicate discriminatory content within the media.

The project was carried out in nine cities of Ecuador (Esmeraldas, Porto Viejo, Guayaquil, Manta, Bahia de Caraquez, Puyo, Cuenca, Riobamba and Quito), and has the participation of almost 13 000 people, who “took the microphones to express themselves with absolute freedom”, said the president of Cordicom, Patricio Barriga.

Some of those who participated in the creation of an official video of the campaign were representatives of people with disabilities, seniors, GLBTI groups, ethnic groups (African descent, peasants and indigenous) and urban (graffiti artists and rappers).