The public hospitals in Ecuador got out of hand with the Ministry of Public Health (MSP) and the Ecuadorian Institute of Social Security (IESS), the two institutions that, on paper, direct, monitor and control the use of resources in their attached entities. 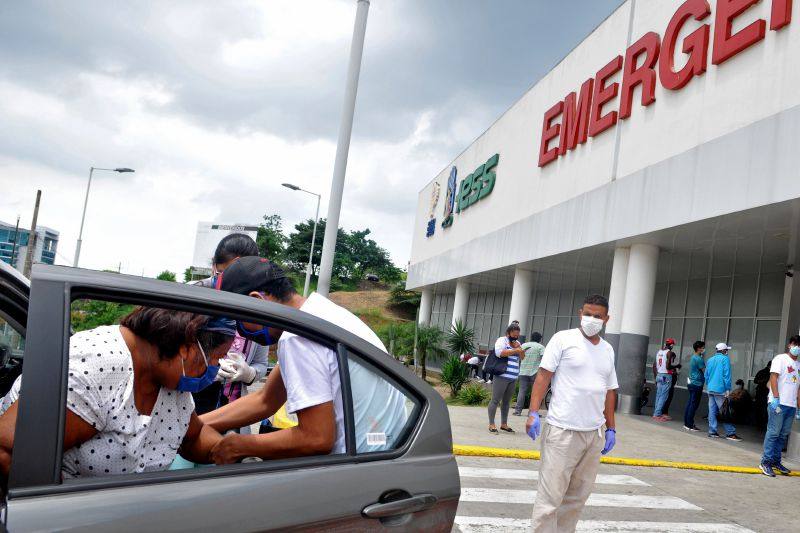 Although corruption ceased to be a novelty many years ago in Ecuador, during the last three months – in the midst of a pandemic – it reached a special nuance, as the map of complaints and suspicions grew as fast as that of infections and deaths of thousands of Ecuadorians –Poor, for the most part– who did not have timely attention to be COVID-19.

A few weeks after the health emergency began, decreed on March 11 to confront the pandemic, the press and social networks revealed millions of purchases with surcharges, irregular processes, contractors who did not meet the legal and technical requirements … Masks or covers for corpses, essential implements to equip medical personnel, were acquired at exorbitant prices or from suppliers that had nothing to do with health issues.

“Where you touch, there is pus”, recognizes the Minister of Health, Juan Carlos Zevallos, referring to the contracts made by public hospitals. However, like the rest of the authorities in the field, it prefers not to give names or make details while the Comptroller and the Prosecutor’s Office do not conclude their inquiries.

In the three-month health emergency alone, based on allegations of corruption in the purchase of supplies, the Comptroller’s Office has initiated 86 special examinations related to the health system, of which 40 correspond to MSP hospitals. Similarly, there are 30 audits at IESS, including its headquarters and branch offices.

At the same time, the Office of the Prosecutor – under the premise that a criminal offense has been committed – has opened 27 previous investigations and a prosecution for irregularities in hospitals from March to date. In 21 files, his accusations indicate that he had perpetrated; in three, influence peddling; in two, concussion; in one, bribery; and in another, alteration of evidence.

A look at the cases investigated shows that in 22 of the 24 provinces there are possible cases of hospital corruption. Only in Napo and Esmeraldas no audits have been opened yet, which does not mean that there are no complaints at the local level.

In total, around 50 hospitals in most of the country are being investigated by the Comptroller or the Prosecutor’s Office, due to the found indications of abuse of public money in the emergency.

The Ministry of Health, headquarters, is also the subject of a special Comptroller’s examination, as well as the National Research Institute (Inspi), 42 district directorates, and 2 provincial coordinations.

The work orders have an analysis of the contracting-execution, delivery-reception and distribution of goods, services, equipment, supplies, devices and medicines to serve COVID-19.

According to the minister, the only thing that the MSP can do is an exclusively accounting control –for example, of budgetary compliance–, since with regard to item verification, prices, quantities, supplier qualification, contests… there is discretion and autonomy in every hospital home.

The president of the IESS Board of Directors, Jorge Wated, makes a similar diagnosis. “Each hospital unit (of the Insurance) has its public purchasing unit and that is how the system has worked for years.”

The exit that both propose is the same that their predecessors have repeated: creating commissions and retouching the old administrative structures.

Internally, the equipment of the Comptroller’s Office and the Prosecutor’s Office are worn out. Not only because of the instability caused by the pandemic, but also because of the lack of certainty that its officials can continue working, after the announcements of dismissals made by the Government. Auditors and prosecutors do what they can. They request documents and assemble cases in person or digitally, with fewer and fewer resources.

Germán Rodas, coordinator of the Anti-Corruption Commission, believes that for years mafias were consolidated that went through weak control mechanisms. In 2019, he recalls, after a documented investigation, the Commission alerted the MSP and the IESS to “at least six groups, each with up to ten companies fully identified with the robbery of hospitals.” Back then, there was no response; Today, these complaints serve to support various cases.

Leonardo Viteri, a former assemblyman, surgeon and researcher, says that the negotiated ones come from the days of Correísmo, “when, for example, the guard, food and cleaning services were delivered to the like-minded governors, assemblymen and politicians.”

Then, he adds, “managements were invented to put them above the addresses. The managers of the hospitals were the collectors (of illicit money). Now, it is no longer the politicians, but the providers who are putting the directors. “

Minister of Health wants to avoid the emergency regime

The Minister of Health, Juan Carlos Zevallos, maintains that market conditions influenced public purchases made during the emergency.

He says that there were times when the supply of supplies – for example, masks or paracetamol – was insufficient, since if there was not the required quantity, the technical characteristics were not appropriate.

During the emergency, the Ministry of Health carried out three purchase processes (devices and medicines) for a total of 96.6 million.

Zevallos announced that from this Monday the 15th it will apply the common purchasing system and not the emergency one. “My despair, my anguish is to stick to the regular,” he said. (I)

The first news of corruption due to purchases in the health emergency was that of the IESS: a food and beverage company had been selected to purchase medical devices, including masks, and the premiums had reached 9259%.

The rest of the cases cascaded: the body bags in the Guasmo Sur, Los Ceibos and Ibarra hospitals; the construction of the Pedernales Hospital; food kits from the National Risk Service; the tests and masks of the Prefecture of Guayas; the consultancies of Teodoro Maldonado Carbo; the processes of the Ministry of Health and the Water Company of the Municipality of Quito.

In all these cases, in which high public officials, such as the prefect Carlos Morales or the ex-secretary Alexandra Ocles, must respond, the Comptroller’s Office detected indications of criminal responsibility for corruption and sent the reports to the Prosecutor’s Office.

However, the research map is much broader. According to the last cut, closed to date, the Comptroller’s Office carries out 200 audits related to the health emergency. Of these, 86, in entities of the Ministry of Health; 30 at the IESS; 58, in municipalities; 16, in prefectures; 2, in parish meetings; 7, in the Executive, and 1 in the Isspol. (I)

The most scandalous price premium is in “Los Ceibos” hospital