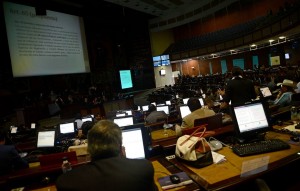 The Ecuadorian President, Rafael Correa, answered a news reporter regarding the economic crisis that is enduring SOLCA – a hospital from Guayaquil specialized in treating cancer patients. Correa claimed that the topic is not interesting and that he would be unwilling to address the reporter in the future if asked again about the same issue.

“I have talked several times with the executives from SOLCA and they want to create a scandal where there is none”, said Correa. “For starters, let’s me question why a private foundation needs money from the State. That is the tendency in this country… to have private organizations that depend on the State… You will say that SOLCA doesn’t receive money from the State, but in the past, a law was created to provide funds to SOLCA! That is illegitimate because it involves a non-voluntary exchange for a private organization. And only legal public organizations can impose non-voluntary exchanges”. (I)