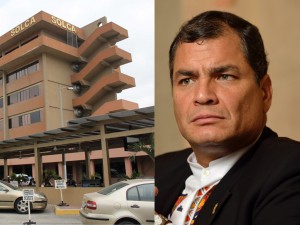 “There has been an innecessary scandal regarding the fund transfer to SOLCA“, expressed the Ecuadorian President, Rafael Correa, who also insisted that the State does not owe 130 million dollas as presumed, but only 22 million dollars, while another set of 27 million dollars are being audited.

Correa clarified that the tax of 0,5%, established by the Currency Code and applied to bank transactions, is not exclusive to SOLCA. “The media has lied. The tax is for comprehensive cancer care (including the Ministry of Health, social security and prevention campaigns). This income is not exclusive for SOLCA”, Correa insisted. Then added: “Don’t tell me this debt is the reason why the are declaring bankruptcy”.

Solca on debt, the president said: “Do not tell me why they are breaking.”

However, the law states that “the resources of this collection are to be used for the financing, integrally, of cancer treatment”. Another paragraph from the law also states that “the financing is in favor of SOLCA, which will be transferred to the entity by the Ministry of Public health, every three months and in anticipation”. (I)