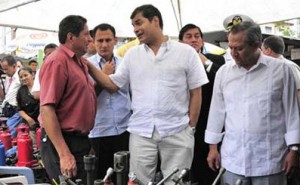 Over 9,000 hectares on the north of Guayaquil have human invasions in a zone that belongs to the hydraulic system of península de Santa Elena, which would remain militarized by Correa’s decision.

Yesterday president Correa announced that the safety zones would be enabled to protect the people that reside in the area, this way the government will fight the land traffickers.  During a conversation with the media Correa accused Tony Estacio, Balerio Estacio’s brother (Balerio was a former PAIS Assemblymen), and also Marco Solis of committing this illegal acts.

Afterwards Correa asked the residents of the invasions to stay away of scamming done by the land traffickers. Correa also told them not to paid for the land they “bought” or the “services” they provide, like the electricity they receive which is also stolen.

To appease the residents, Correa guaranteed the presence of the Military Forces who would protect the land and offer security. However, the ministry of Internal and External Security, Homero Arellano, did not specified how many soldiers would intervene or how long will they work in the zone.

The president ratified the residents that the public force would not evict them, and reinstated that their presence is to protect them.

Correa explained that the zone has been declared as a State interest because if the location collapses it would leave without water to the entire Santa Elena province.

The president would perform a census on the unconsolidated zones to determine the amount of families that would be relocated on sectors around the city. These residents would be allocated on condos, he added that the dwellers of these invasions have lived there for 20 years and want to legalize their terrains, while giving them Basic services. To fulfil this action Correa hopes to have the City hall support. The Government would offer legal support for the residents, so that they can legalize their lands and detain the scammers.