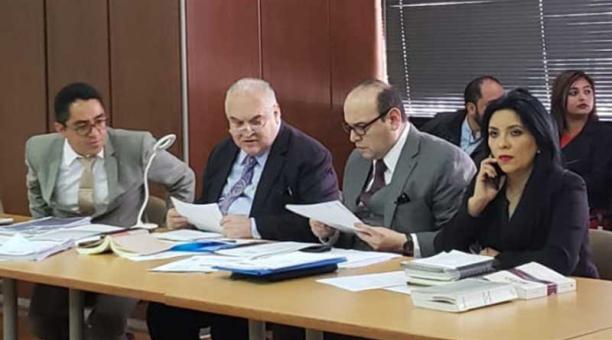 Former President Rafael Correa failed to comply with the decision of Judge Daniella Camacho, who ordered that he appear every 15 days at the National Court of Justice, in Quito, for the duration of the investigation into the kidnapping of ex-ambassador Fernando Balda.

Correa’s first assistance was scheduled for Monday, July 2, 2018, but he preferred to go to the Consulate of Ecuador in Belgium, at 11:00 (04:00 Ecuador time). There he requested that his visit be recorded in writing and with an official stamp. The certificate, which was published by the former head of state on his Twitter account, has the signature of the vice-consul, Bernardo Burgos González.

There, Correa indicated that his assistance to the diplomatic office was due to the fact that the prosecutor general in charge, Paúl Pérez, asked the judge for the presentation to be in Belgium. This request was made during the bonding hearing of the former head of state for the abduction of the former ruler, on June 18. But in that same diligence, the judge rejected the prosecutor’s request and clarified that the diplomatic offices “are not for that.”

Correa said that as president he wants to comply with the procedural demands, “despite the obvious political and judicial persecution that I have suffered in recent months.” The former official also justified his failure to comply with the argument that he exercised his rights as a foreign citizen and cited the Vienna Convention, among other international standards.

The criminal attorney Paulina Araujo explained that in any case, the only order that must be met is that issued by a competent judge and not a request made by a prosecutor. “The former president had a legal obligation to appear in Quito and he did not comply. It did not make sense to appear abroad, because it would be denaturing what is a criminal process in the light of the Ecuadorian Law. ”

The Criminal Integral Code (COIP), in its article 542, states that when a person violates the measure ordered, “the prosecutor will request the judge a precautionary measure depriving of liberty.” That is, preventive detention. On Monday, Byron Valle, Assemblyman of the Citizen Revolution caucus, said he will not be surprised if the judge determines in the next few hours the deprivation of liberty of the former head of state.

“That would show the manipulation that exists. Here there is not a spirit of wanting to comply with justice, but rather of violating rights and fulfilling slogans. We already know where they are going. ” At the request of Caupolicán Ochoa, Correa’s lawyer, a hearing is scheduled for today at 1:00 pm in which the order for periodic filing will be reviewed.

That diligence will be taken advantage of by Balda’s lawyer, Felipe Rodríguez, who will request the imprisonment of the former president. If that happens, the jurist assured that he will request the red diffusion of Interpol so that it is located and captured, as it was done with the ex- national secretary of Intelligence, Pablo Romero.

He is also linked to this case and is currently facing extradition proceedings in Spain. The defense of Balda fears that Correa could receive the protection of Belgium because his wife is from that country and his children also have that nationality.

Even, believes that the former president could shelter under a political asylum. According to the COIP, a person accused of conspiracy and kidnapping, which are the crimes for which Correa is investigated, cannot be tried in absentia. Therefore, if the judge orders his arrest and Correa does not surrender, he would become a fugitive. In that case, he should wait until the file prescribes to return to the country, that is, after nine years.

For the jurist Araujo, first one must wait for the prosecutor to accuse the former president or refrain from doing so. The fiscal investigation or public investigation phase will end on July 18. That is the deadline that the Prosecutor’s Office has to gather the evidence against the intellectual and material authors of the kidnapping of Balda.

Legislators, councilors and ex-employees related to the former head of state announced that in rejection of this judicial action they will march through the streets of Quito. They plan to meet this Thursday, at 3:00 p.m., at El Arbolito Park.

Six people are linked in the investigation because of Balda’s plagiarism. Among them three policemen, the ex-director of Intelligence Fausto Tamayo, the former chief of the National Intelligence Secretariat Pablo Romero and the ex-president Rafael Correa. (I)