Rafael Correa and Jorge Glas are authors of instigation to commit the crime of bribery in the Bribery case. This was stated on the afternoon of this Monday, September 7, 2020 by the Court of Cassation of the National Court of Justice of Ecuador, in the last judicial instance. 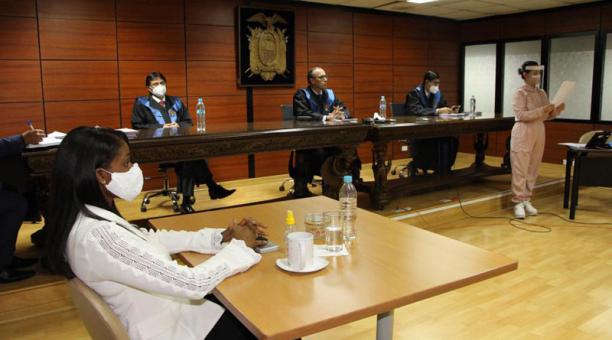 The Court declared the appeal of Correa and Glas inadmissible ; I point out that the culprits instigated “Pamela Martínez to set up the distribution of bribes and the illicit system in an office parallel to the Presidency of the Republic.” While former Secretaries of State Alexis Mera, Vinicio Alvarado, María de los Ángeles Duarte and Walter Solís, as well as Viviana Bonilla, Cristian Viteri and Pamela Martínez, are co – perpetrators of the crime of aggravated bribery, according to the magistrates.

Pamela Martínez was a presidential advisor at the Carondelet Palace during Correa’s presidential regime. Initially, she was detained and later collaborated with the investigations of the case, for which the Prosecutor’s Office determined which companies made contributions to the Alianza País political movement in exchange for obtaining contracts from the State.

Based on the granting of the benefits of effective cooperation, the Court of Cassation imposed the penalty of 9 months and 22 days for Pamela Martínez.

The court made up of joint judges Javier de la Cadena, Milton Ávila and José Layedra heard the cassation appeals filed by Correa and 15 other defendants who were sentenced for bribery in two instances in the Court.

Based on Article 657 paragraphs 5 and 6 of the COIP, the Court declared inadmissible the resources of cassation de Alvarado, Bonilla, Street, Cordova Correa, Do You Choin, Fontana, Galarza, Glas, Hidalgo, Martinez, Mera, Philip Coper , Salas, Sánchez, Solis, Betancourt, Verduga and Viteri as they were not justified with the technical sufficiency required by this extraordinary medium.

Due to the health emergency of covid-19 , the hearing to know the oral sentence was held in two different rooms of the High Court and the lawyers and sentenced persons were also able to appear electronically.

Prosecutor Diana Salazar: “Justice is being inaugurated in this country”