Correa offended diplomats, according to internationalists 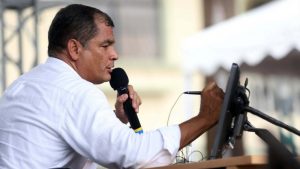 President Correa’s warning of “sending ambassadors home” (whom he branded as “fourth-class ambassadors”) for publicly criticizing the decision of the Ecuadorian government to suspend Bilateral Investment Treaties is, in the opinion of internationalists consulted, an error and an offense for the countries represented by these officials.

The president, who defends the suspension of BIT´s signed by Ecuador with more than fifteen nations, censored last Saturday the members of the diplomatic corps for “criticizing the sovereign decisions of the country.”

Correa alluded to the Italian ambassador to Ecuador Marco Tornetta, who stated during an interview that the denunciation of several BITs, including one signed with that European nation, is “a negative signal, contradicts with the multiparty agreement,” and “a transparent situation is required to calm the markets.”

According to internationalist Juan Carlos Faidutti, an ambassador represents a nation and any offense received, is also received by his country.

“Throughout my long diplomatic life, I have never seen a head of state insulting a foreign diplomatic representative. For me this is an international novelty,” he says.