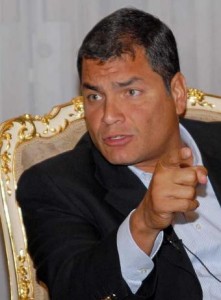 The Telecommunications bill was partially vetoed by the President of the Republic, Rafael Correa. The President made 24 comments on the text.

Yesterday, the document would have come to the legislature, said the website of the National Assembly.

The website said that one of the main observations refers to the table proposed to charge a value based on market share of telecommunications companies. The Executive suggests that the base is not 30% but from 35% of concentration of users, returning to the original proposal that was raised in the Committee on Autonomous Governments. Thus, Conecel, which operates in the country under the Claro brand, would be the one that shall pay this category.

Richard Calderon, President of the Autonomous Government Commission, said that next week they will session to discuss the observations. He also said that from today, they have a period of 30 days to make a report to acquiesce or not the presidential veto.

In addition, comments were made on aggravations, appeal, intervention procedure, powers of the board of the Agency for Regulation and Control of Telecommunications, powers of the Executive Director of the same entity, among others.

President Correa ratified the testimony of González about the 30-S