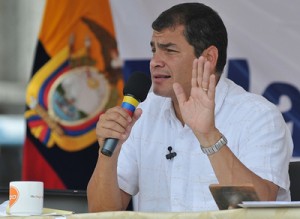 Rafael Correa said on Saturday that the grant of the 4G broadband will be renegotiated with the mobile phone companies of the country.

“We will renegotiate the 4G broadband and we will look after the interests of the country”, Correa said during his Weekly Address to the Nation.

In the country there are “17.6 million subscribers” and “90% of the population has a cell phone”, he added.

Jaime Guerrero, Minister of Telecommunications, added during the Broadcasting, that companies are making good business and “That will have to be rewarded in the State resource which is the spectrum.”