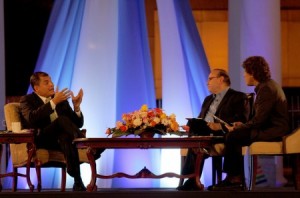 President Rafael Correa announced that the government is examining the possibility of establishing a ceiling on the profits of a certain sector of the country’s workforce.

Correa recalled that until the mid-90s there was a limit on profits in order that “there is no heterogeneity among the workforce. Just like there are capitalists that can make a lot detriment of employees, among employees can be people who get a $ 30,000 profit per year and people who do not receive profits ever.”

Because of this, the president pointed out the chages he plans to make. “We have decided that the best alternative is to return to a system like the one in the 90s putting a suitable ceiling, a ceiling which will reduce profits to a 2×1000 in the workforce. Meaning that, 1 of 500 workers will see decreased his profits,” he said.