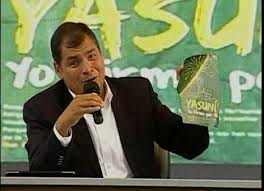 President Rafael Correa questioned Yasunidos collective members, who conduct a campaign to collect signatures to convene a popular consultation and stop the exploitation in the Yasuní National Park.

“I would like to call a referendum because I’m sure that I will defeat them at the polls. When for legal reasons it has been required permission, for example, a judicial reform has been done recently, but why do I have to ask permission about decisions that I have all the attribution to make constitutionally? …  I have all the attribution to decide on Yasuní “he said.

According to Correa, exploitation in the Yasuní will be just a 0.001 per thousand, which means between 200 and 500 acres of affectation and not the 100,000 as reported in a poster published in the media by the Yasunidos group to collect signatures.

He also noted that the Yasunidos are desperate collecting signatures they don’t have. “They say they still need 100,000 signatures… but all who we have collected signatures know that the 30% of signatures are not valid,” he predicted.

So far, the group has collected about half a million signatures.

Votes count process was concluded by the CNE