U.S. and Russia don’t reach an agreement on crisis in Ukraine 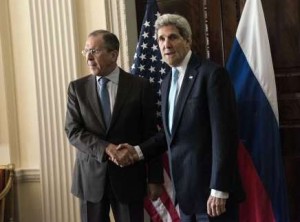 John Kerry and Sergey Lavrov heads of diplomacy of the United States and Russia, met day yesterday in London without having have made progress toward an agreement about the crisis in Ukraine and the situation on Crimea after six hours of conversations.

“We don’t have a common vision of the situation. The differences are there. But the dialogue has been constructive and undoubtedly helps us to understand each other, stated Sergei Lavrov, after the meeting with his U.S. counterpart.

The meeting between Kerry and Lavrov was a last Western attempt to stop the annexation referendum to Russia of the Ukrainian province, scheduled for tomorrow.

After the meeting, Lavrov said that Russia will respect “the opinion of the people of Crimea”, while Kerry reiterated that “there will be sanctions” if there is a referendum.

Within hours of the London meeting was announced that U.S. Vice President Joe Biden will travel to Poland next week to meet with leaders of the two countries and discuss the issue of Ukraine informed the White House.