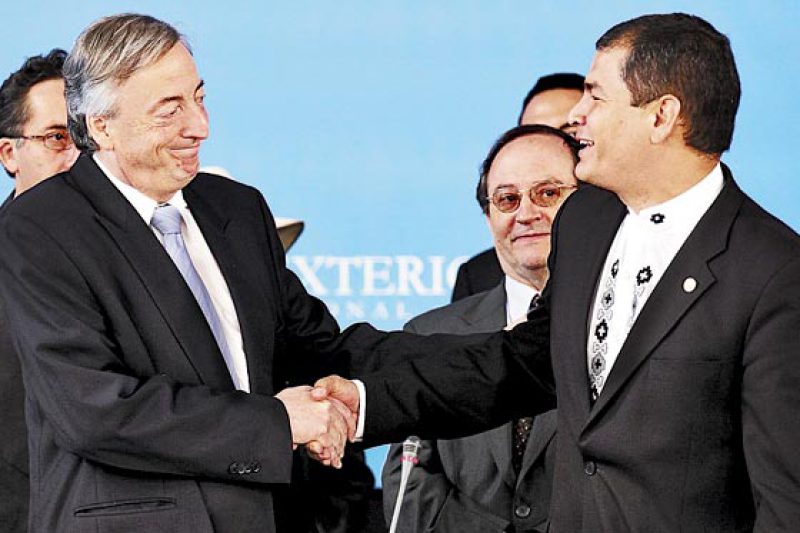 “On behalf of the people of Ecuador, my government and myself, I Thank you infinitely for your intervention in favor of democracy on my country” affirmed Rafael Correa through a letter to former Argentinian President Néstor Kirchner, Secretary General of UNASUR.

According to sources from UNASAR quoted by State Agency Télam, Correa recognized that the loss of human lives was irreparable, but there’s the consolation for these people of having safeguarded the historical advances of the “Citizen Revolution that Ecuador has conquered for the sake of the poor and humble”. Correa added that “the dark plan to put an end to democracy and the plot to assassinate the President of Ecuador has been revealed, along with the hidden perverse interests behind this political strategy, all of which directly incriminate politicians and forces of reaction and the most recalcitrant Right-wing of the country”.

Correa showed himself very thankful to the Military of Ecuador, who completely supported the President during last week’s coup attempt. In addition, he expressed gratitude towards the solidarity of international organizations such as UNASUR and OAS. Correa called the Military of Ecuador “patriot”, and said that UNASUR “proved its legitimacy both by the speed of [their] call and meeting in Buenos Aires, as well as for their categorical responses to any attempt to destabilize democracy in the region”.

UNASUR reacted immediately and called for an extraordinary meeting that same day to gather Presidents and Ministers in Buenos Aires, where a strong support was expressed for the government of Correa and Ecuador’s democracy, along with a clear rejection of any kind of coup attempts.

Government Intelligence Units Will Be Restructured