The strategy developed by the team of former President Rafael Correa to continue with its electoral aspirations must pass the first test. The candidates appointed in the Democratic Center primaries announced that they will accept their pre-candidacies at the Directorate of Political Organizations of the National Electoral Council (CNE), in the north of Quito, on Thursday, August 27, 2020. 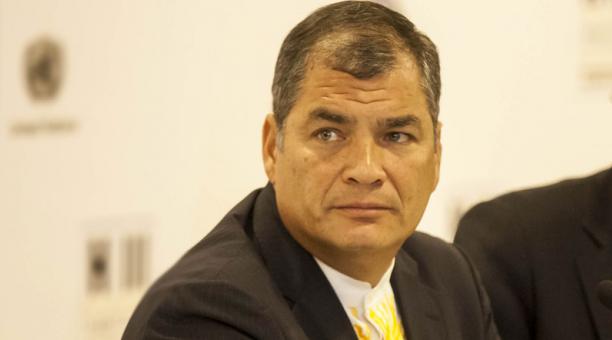 It was reported that Andrés Arauz, presidential candidate, as well as the candidates for national assembly members and Andean parliamentarians, will complete this process in person . The leaders of Centro Democrático will face the first regulatory hurdle.

Having been appointed as a candidate for the Vice Presidency, Correa is obliged to personally and non-delegable his candidacy , as other candidates have already done. However, given that he remains in Belgium and has a valid preventive detention order , his acceptance in person would be “ harakiri ”, since upon arrival in the country he would be arrested and could not advance to the CNE to sign the documents.

The preventive detention order against Correa is the product of the trial that follows him for the kidnapping of Fernando Balda, in 2012, in Bogotá.

Enrique Lesscal, director of the Democratic Center, confirmed that a team of lawyers is finalizing the legal strategy to try to get the CNE to process the proclamation of Correa’s pre-candidacy, without his presence in the capital. He ratified that it is being considered to present a power of attorney, in which the leader of the Citizen Revolution delegates to complete the acceptance to another person.

However, Diana Atamaint, president of the CNE, pointed out that this is not possible, since the Regulation of Internal Democracy Processes establishes that the acceptance process is highly personal and cannot be delegated, in unity of act.

If Correa resigns from the appointment, Centro Democrático could replace his option for the Vice Presidency. Despite the fact that on Sunday, August 23, the president of the CNE said that the replacement must have come out of the primaries, this Tuesday, August 25, she rectified and said that in three specific cases this is not necessarily the case.

According to article 11.1 of the regulations, in the event of death , resignation, physical or mental disability of a candidate, the changes will be made in accordance with the procedures established in their statutes. That is, the Democratic Center, if its statutes allow it, could include another vice-presidential profile even if it has not been registered in the primaries.

Correa was also nominated on the list of Assemblymen for the Exterior. However, his former chancellor, Guillaume Long, was elected to that dignity. In order for Correa to be registered as a candidate for Assemblyman abroad, Long would first have to resign his appointment.

Whichever path they choose, the deadline for Correa to complete the acceptance process at the CNE expires on Tuesday, September 1, since they are counted ten days after his election in primaries, which were last Saturday at the Democratic Center.

If Centro Democrático succeeds in getting the CNE to process the acceptance of Correa’s candidacy , his participation is not yet guaranteed. Only on September 18 will the registration of candidates formally begin at the CNE, where the requirements and disabilities of the applicants will be reviewed . This phase runs until October 7. One of the prohibitions is to have an enforceable conviction .

But first, on Thursday, September 3, the Court of Cassation of the Bribery case will be installed , where Correa has been sentenced in two previous instances to eight years in prison for bribery. If the ruling is ratified, the sentence would be executed and Correa would be disqualified for 25 years from participating in the elections.

The Court could issue the judgment the same day, or take a week to do so and take another seven days to put it in writing. . In this last scenario, the sentence would be made public almost at the same time as the start of the registration period. But it could also take years, as has happened with the matching of the processes resulting from the bank holiday ( Filanbanco and Mahuad cases , for example)

The “immunity” enjoyed by applicants is counted from the time the qualification of their candidacy remains firm. Atamaint recalled that a candidacy can be challenged at the CNE and then appealed to the Contentious Electoral Tribunal (TCE).

Only after these processes is a candidacy considered official. Article 108 of the Code of Democracy establishes that candidates may not be deprived of their liberty or criminally prosecuted from the moment of qualification until the proclamation of results or prosecuted, except in cases of flagrant crime, sexual crimes, violence against women. gender and intrafamily.