Correa with a cloud of bodyguards in a military compound 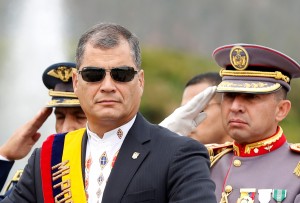 It seems Rafael Correa feels so insecure among the military. Correa went to the Civil Registry located in the United Nations and Amazonas streets to get his new identity card and took with him less bodyguards than on Friday 26 at the Parcayacu Military School.

The ceremony of change of command of the Armed Forces was plagued with political and symbolic verbal messages. The transmission of El Ciudadano TV, that organ of the correist propaganda paid by taxpayers, was quite selective. It did not show, for example, retired military when remained sitting (only them) at the time when the president was arriving to the grandstand. The camera was installed in a way that government officials (ministers, undersecretaries, assemblymen, prosecutors, comptroller, attorney general, members of the Council of Citizen Participation, Judiciary council and so on) occupied most of the time the entire screen , applauding the president. (I)