The Court, made up of co-judges Lauro de la Cadena, Milton Ávila and José Layedra, denied the cassation appeals presented by 16 defendants in the Bribery case and ratified the eight-year sentence against former President Rafael Correa, former Vice President Jorge Glas and others. . 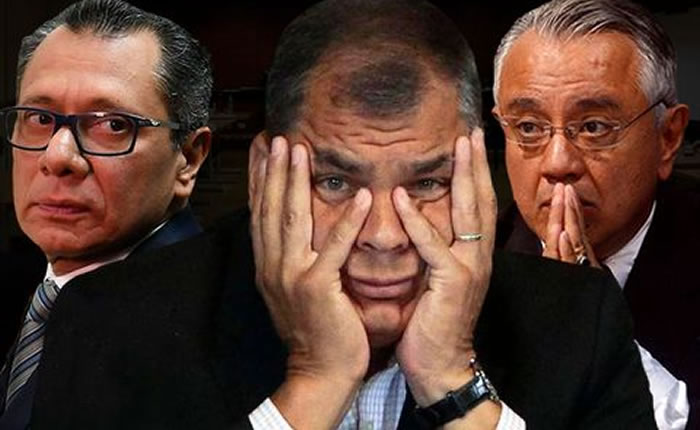 The ruling was read in the National Court of Justice, last Monday, September 7, 2020 in the afternoon. The magistrates took two days to analyze the arguments that the Prosecutor’s Office, the Attorney General’s Office and the defense of the sentenced presented during the cassation hearing.

The decision was not unanimous. The co-judge Milton Ávila did not vote with the rest, as he said that the authors of the bribery should be sentenced to six years and the accomplices, three.

The magistrates confirmed that Correa and Glas were the instigators of the crime. “Without their influence, the crime would not have materialized.”

In addition, the co-judges said that Correa as leader of Alianza País advised Pamela Martínez to “set up an illicit system of bribery distribution in an office parallel to the Presidency of the Republic .” The ex-official’s request for cassation was also denied, but due to the cooperation and information she provided in the case, the sentence was lowered from 32 months to nine.

A group of people came to the outside of the National Court of Justice, to protest against Correa.

Regarding Jorge Glas, they said that he instigated the crime to be committed from his position as Minister of Strategic Sectors and later as Vice President. “He obtained financial resources for his own benefit and for the political movement.”

Shortly after learning of the ruling, Mera said in his social network account the following: “I will go to jail without having seen a penny or knowing any criminal structure .”

During the cassation hearings, the lawyers questioned the application of 11 articles of two criminal norms in the sentence. They claimed that the law was incorrectly applied and interpreted.

However, the co-judges said yesterday that after conducting a legal analysis of the ruling, they did not “attack the right to defense of the defendants.”
This newspaper spoke with Teodoro Calle and Ramiro Galarza, lawyers for Correa, Glas and Alexis Mera. They announced that after receiving the ruling in writing they will present clarification and extension appeals.

Followers of the former president arrived yesterday outside the Guayas Provincial Court to demonstrate.

The criminal lawyer Gabriel Ponce indicated that the first legal figure serves to clarify aspects of the sentence that were not detailed or are written in a confusing way. The second resource allows the lawyer ask the judges to be included in the ruling topics discussed at the appeal hearing.

Enlargement and clarification does not change according to the criminal law, sentencing. After both requests are resolved , the sentence will be finalized and the arrest warrants will be issued for those sentenced.

Afterwards, the ruling must be sent to the judges who sentenced in the first instance and to the magistrates who ratified the sentence at the appeal hearing , on July 22.

The Constitution (art. 113, numeral 2), says that those sentenced are politically disqualified for life.

Correa spoke on Twitter and indicated that “in record time they are taking a final sentence to disqualify me as a candidate. They don’t understand that the only thing they do is increase popular support ”.

The criminal lawyer Mauricio Pacheco pointed out that for the indicted businessmen the consequence is that they are prohibited from having contracts with the State.

For one of them, Alberto Hidalgo , whose appeal was denied from the beginning, the Court increased his sentence from 32 months to eight years, as the direct author of the crime.

After yesterday’s hearing, the State Attorney General, Diana Salazar , stated the following: “This is a clear message. From the highest structures of power, the law is for everyone, there is no one above the law ”.