Court confirms the acquittal of the defendants in the Cofiec case 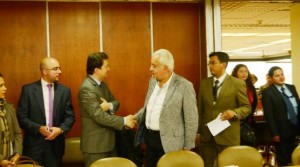 The national judges Jorge Blum, Merck Benavides and Vicente Robalino confirmed on December 11 the innocence of the four former members of the Cofiec board, accused by the Prosecution of an alleged bank embezzlement by the irregular award of $ 800,000 to Gastón Duzac Argentine citizen.

The ruling came under protest of the General Prosecutor, Galo Chiriboga, who submitted the resource of appeal in orderthat the judges review the decision of exonerating Germánico M., Omar U., Diana M. and Roberto S.

According to Chiriboga, the former members of the board authorized the granting of the credit, even though they had knowledge that Duzac had a tourist visa in Ecuador and did not justify his assets and ability to pay. Therefore, he accused them for involvement in the crime of bank embezzlement, as authors.