BREAKING NEWS
Ministerial agreement would enable the Ecuadorian fishing fleet to fish for giant squid
Ecuador has granted 44 051 humanitarian visas to Venezuelan citizens
Prosecutor’s Office denounces a death threat against the judge who is prosecuting Jacobo Bucaram
What are the crimes that Jacobo Bucaram is linked to?
Richard Carapaz arrived in 22nd place and was the best Latin American in the World Cycling Championship; Jualian Alaphilippe was proclaimed champion
Epidemiological week ended with a considerable decrease in infections
Shrimp and banana shipments to China decline
Ecuador receives financing for environmental projects
Alexis Mera entered prison and Viviana Bonilla was dismissed
Alexis Mera was taken to jail; 9 more orders must be fulfilled 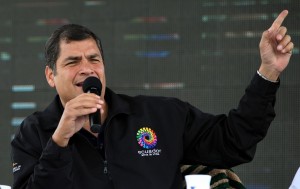 President Rafael Correa called unconstitutional paying for a driving course as a requirement to obtain a driver’s license. These statements were made in support of the reform yo the Land Transport, Traffic and Road Safety Law, approved by the National Assembly and which eliminates the requirement to access the document for non-professional drivers.

“Why do I have to pay $ 180 to a private company to access my license? Do you know what 150, 180 and even $ 200 mean? That’s more than 50% of the basic salary. The poor people could not get a license,” Correa argued in an interview with reporters of La Concordia county, province of Santo Domingo de los Tsáchilas.

The President described the old system of licensing as a failure. As he stated, most registered deaths and accidents occur in private vehicles in urban areas. “If it had been successful, traffic accidents would not happen.”

With this reform law, the driver will give a test in the National Transit Agency, if not approved a driving course must be taken.