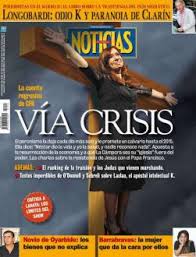 The cover of theargentina journal , Noticia, in which the President Cristina Fernández is crucified under the headline “Via Crisis” received criticism from the ruling party and Catholic Church, official Télam agency reported on Friday.

The Governor of the province of Entre Ríos, Sergio Urribarri, referred to the controversial cover as “one attempt to discredit and disqualify with infamy or promoting this management who refounded the Argentina economic crises”.

The words of Urribarri came preceded the harsh criticisms by the Archbishop of Buenos Aires, Cardinal Mario Poli, who described yesterday the publication as “in very bad taste”.

But the President, who is at her family residence in the province of Santa Cruz (South), has not ruled on the matter, other sectors of the ruling Frente para la Victoria have come to the passage of the position of the magazine directed by Jorge Fontevecchia.

Representatives of the Jewish community also expressed their rejection to the cover to be offensive, despite recognizing the right to freedom of expression.

Over 500,000 worshipers in the procession of Cristo del Consuelo in Guayaquil